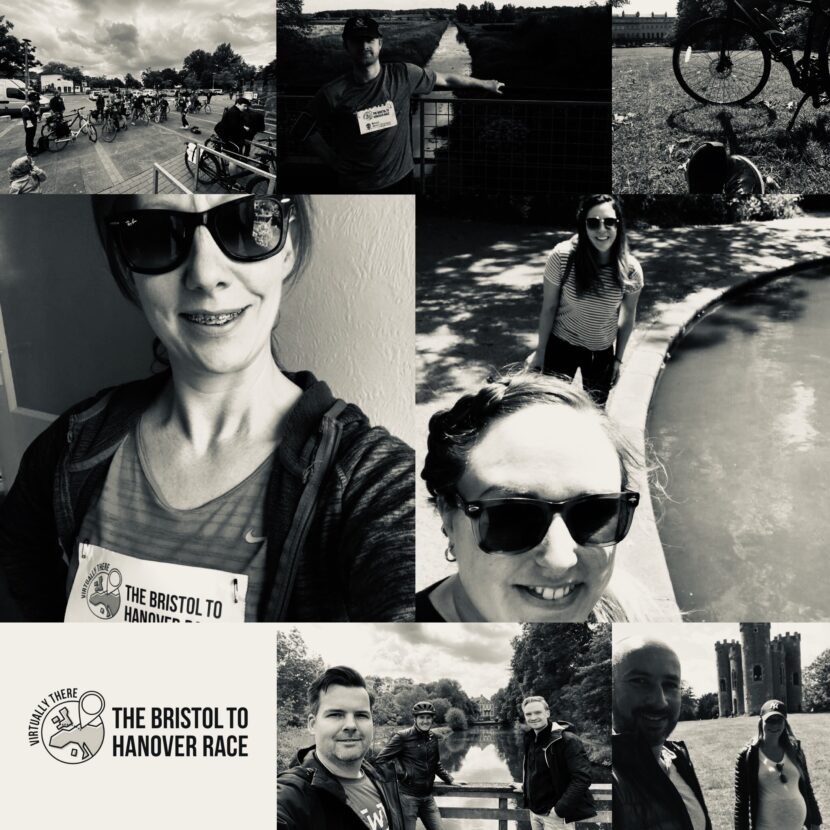 Bristol Junior Chamber (BJC), a networking organisation for young professionals in the city, has raised £5,090 for Above & Beyond, a local charity raising funds for Bristol city centre hospitals and supporting NHS staff, in a socially distanced charity challenge.

The challenge, ‘Virtually there! The Bristol to Hanover race’, saw BJC members team up with Wirtschaftsjunioren Hannover – their networking counterparts in Hanover, with which the city of Bristol is twinned – to cover a combined distanced of 1,000km over a period of seven days by walking, running, cycling or horse riding.

Following government guidelines in place owing to COVID-19, the 85 participants used activity tracking technology to clock up their kilometres whilst remaining socially distanced, sharing photos and reviewing progress at the end of every day. Massively exceeding both their fundraising and distance targets, the racers travelled a huge 5,668km over the seven days.

With its members keen to support NHS frontline staff in the city during the Coronavirus pandemic, Bristol Junior Chamber chose to fundraise for Above & Beyond. The charity’s mission is to make a difference to patients, their families and the staff who treat them in Bristol city centre hospitals through creating welcoming environments, funding innovative research, supporting staff training and providing the latest facilities and technology.

Friday 29 May marked the last day of the challenge, by which point Bristol Junior Chamber had received £2,500 in donations for the charity, which Bishop Fleming – an accountancy firm with offices in the South West and West Midlands – kindly agreed to double to £5,000. The JustGiving page has continued to receive donations.

The charity race comes as Bristol Junior Chamber welcomes its new President, Jack Callow, who took over the post from Immediate Past President Alice Peacock in April. Assuming the role in unprecedented circumstances, Jack – who is a restructuring manager at Bishop Fleming – has enthusiastically and resolutely risen to the challenge of rallying a networking organisation that would normally enjoy a vibrant calendar of events.

The organisation’s Annual General Meeting – typically held in April to formally appoint the new President – was postponed and a working group was established to support Jack with ensuring Bristol Junior Chamber’s 160+ members continued to enjoy networking, knowledge-sharing and socialising opportunities through virtual means.

During lockdown, its members have already ‘virtually’ enjoyed a quiz, yoga sessions and book club meetings, all whilst staying connected via WhatsApp groups dedicated to activities such as running, cycling and baking. In June, Tom Skidmore from MoveGB is set to be the guest speaker at the organisation’s monthly meeting and members are also lined up to take part in a Greek cooking session over video call.

The success of Bristol Junior Chamber’s virtual networking has driven the decision to host the AGM via virtual means at the end of June, during which Jack’s Council of Management will be formally elected by the membership body.

On the charity challenge, Jack says: “This week was about coming together whilst apart, promoting physical activity to support our mental health as well as general fitness whilst adhering to social distancing guidelines, and, above all, supporting a fantastic cause.

“When you consider that each participant travelled approximately 10km on average every day, it’s fair to say that I was blown away by the energy and the commitment with which Bristol Junior Chamber members and those of Wirtschaftsjunioren Hannover took on this challenge, particularly in such testing circumstances.

“We’re incredibly grateful for the donations we’ve received from friends, family and colleagues, and we’re delighted to be able to support Above & Beyond and its very worthy cause.”

Gemma Jenkins, Above & Beyond Corporate Partnerships Officer, said: “From everyone at Above & Beyond I want to say a big thank you to Bristol Junior Chamber for taking on this challenge and raising such an incredible amount for Bristol’s hospitals.

“The money raised will make a real difference to patients, their families and the staff who treat them, especially during this challenging time for our NHS.

“Anyone who’s been inspired by Bristol Junior Chamber to plan their own fundraising challenge can get in touch for support and ideas.”

Bristol Junior Chamber is a networking organisation with a large and diverse membership of young professionals from many of the key firms and organisations within the city and region.

Since its inception in 1948, it has been at the forefront of many major projects and enterprises, including the internationally renowned Bristol Balloon Fiesta. It has a firmly established reputation as one of the leading organisations for young professionals within the city.